Cinderella's Ball - Emma wins a dance contest in her wheelchair

How do two people win a dance contest when neither are able to dance? The answer may surprise you because it involves how a quadriplegic child was able to do what no other child could do.

Emma is quadriplegic. Her inability to dance is obvious. She lacks mobility. I, on the other hand, have an invisible disability, Meniere's Disease, and I lack stability. In the previous seven years I had fallen over 100 times. After one fall I required surgery and I've had orthopedic problems and pain ever since. After another fall I hit my head hard enough to be rendered unconscious and my neurologist told me I'm having seizures as a result. 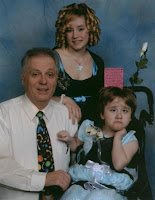 For five years I attended the city wide Daddy Daughter Dinner Dance with my daughter, Stevie, but was never able to dance with her. The risk of falling on a crowded dance floor with a bunch of adrenaline pumped children was too great. For five years I sat on the sidelines and watched enviously as other fathers danced with their daughters. In the past year the prospect of dancing with my daughter became even more remote as my orthopedic problems reached the point where I was having difficulty walking. 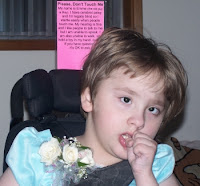 Some say what happened next was coincidence. Others say it was providence. Regardless, it made our Cinderella story possible. Although neither Emma nor I are able to dance on our own, each of us provides what the other lacks. I am able to push Emma's wheelchair to give her mobility and her wheelchair provides me with support to prevent me from falling. As for my orthopedic problems, I just had two steroid injections in my spine. It wasn't anything planned for the Daddy Daughter Dance but it did give me a temporary window of opportunity in which I could take my chances with Emma on the dance floor. I collapsed on the dance floor afterwards and I paid dearly in the following days but it was worth it.


The event was truly a Cinderella's Ball. Every girl was given a long stem rose and after Emma and I were announced as the winners, girls in droves started lining up and giving their roses to Emma. It was spontaneous and it moved me to tears. 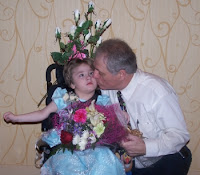 How ironic that, for five years I sat on the sidelines unable to dance, and when finally it did happen, it wasn't a so-called "normal" person who made it happen but a quadriplegic child. And when it did happen it was more than just dancing. It was an expression of joy. We won the dance contest but there was something much greater going on. Although Emma is legally blind she and I made eye contact as I tipped her wheelchair backwards and in that moment while we were "dancing" to The Twist in her wheelchair, I kissed her on her forehead. It was no longer a dance competition but just Emma and me enjoying each other's presence, as if neither of us had any impairments at all.


Perhaps that's what it will be like in heaven, dancing with my quadriplegic daughter without any awareness she or I are disabled.