One of those One-Sided Mornings

It was one of those mornings. When Emma arrived home from school the bus driver informed me one of her shoes was missing. My mind quickly brought forth images of frantic people searching the school and the bus and panicking because it's a quadriplegic child who can't speak and she has to have both shoes and both AFOs (orthotic devices) to do her physical therapy.


I quickly assured the bus driver Emma had both shoes when she got on the bus so it wasn't me but, for appearances sake, I quickly searched the house. Oops, there the missing shoe was right in the middle of Emma's hospital bed. As stupid as I felt for that, it only got worse as I quickly realized I had also only shaved one side of my face. 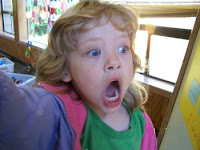 Now, you're probably wondering how anybody could possibly be that dumb so let me explain. Months ago I googled "psycho child" and it came back, "There is hope," and that's the problem, my other brain injured daughter, Hope. While Emma is a quiet as a mouse, 5-year-old Hope is, how do I say this tactfully, not, as evidenced by the multiple police reports that have resulted from innocent bystanders  wondering, "what the #$%^l was that," and calling 911.


So there you have it. Hope was in fine form this morning going psycho because there was a spot on her shirt, her old fart of a father was trying desperately to get both girls ready for school before their school buses arrived, and things fell through the cracks. Well, at least I didn't fall on my crack. I've already done that numerous times due to a balance problem and don't want to do it again. Did I just imply I'm unbalanced?